Earthing systems play a vital role in a coordinated lightning and surge protection system. It is responsible for safely dissipating the lightning currents to ground. At Elecko we use a wide range of materials in numerous configurations to achieve the required resistance level as set out in ISEN 62305: 2011. 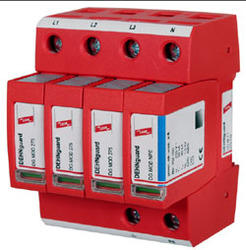 Direct and indirect lightning strikes on a building can generate a surge in electrical power or transient voltage.

This lightning power surge can damage electrical devices that are plugged into a power outlet anywhere in the building. Even though these power surges are so brief that they are measured in nanoseconds, they can cause considerable damage to electrical and electronic systems and equipment, leading to the disruption of operational and sometimes even critical services, and resulting in expensive down time and repair costs.

Measured against the potential losses to business operations or essential services, the business case for surge protection becomes very clear.

A surge protector works by channeling the extra voltage into the outlet’s grounding wire, preventing it from flowing through the electronic devices while at the same time allowing the normal voltage to continue along its path. Electrical surges can damage computer equipment and the device’s internal components and even wipe out any saved data.

ISEN 62305 requires that surge protection must be included as part of a lightning protection system, to safeguard the building, and the people and equipment within it, from the damaging effects of transient over-voltages.